Have you been trying to quit smoking? There have been many techniques and products available to assist smokers in their determibned effort to kick the habit, some more effective than others. Now, the new trend of vaping has been shown by studies to be an effective method in helping smokers quit or cut down on their daily tobacco comsumption.

The study conducted by Ann McNeill, a professor at the Institute of Psychiatry, Psychology & Neuroscience at King’s College London concluded that for those wanting to quit smoking use e-cigarettes more frequently and actively try to stop smoking.

There were two studies done on around 1500 smokers in Britain in December 2012 and the subjects of the study were followed up one year later in 2013.

The first study found that of those who vaped daily with e-cigarettes 65% tried to quit smoking the following year whereas only 44% tried to quit that did not vape. Further, of the daily vapers 14% had cut down on their consumption of tobacco by at least 50% and of the non vapers it was a mere 6%.

The second study of 587 people using e-cigarettes, after a year, 24% of them used the tank models. Of The tank model vapers almost 1/3 had quit smoking. Of the e-cigarette vapers only 1/8 had managed to quit.

It is hard to draw a hard conclusion why Tanks perform better than e-cigarettes.  It could be that they are more economical than e-cigarettes and/or that the refillable nature means more control on choice and nicotine strength.

Linda Bauld, a professor of health policy at the University of Stirling added that the studies contributed to the growing literature on e-cigarettes. She concluded that what we do know is: the type of device, the frequency of use and how much nicotine it contains all contribute to quitting smoking.

Martin McKee, a professor of European public health at the London School of Hygiene and Tropical Medicine, added that it appears vaping can seriously change the tobacco industry, however a precautionary approach by all health authorities is still justifed.

Checkout the infographic below which shows the findings of the study, illustrating the effectiveness of vaping to quit smoking and how e-cigs compare to tanks: 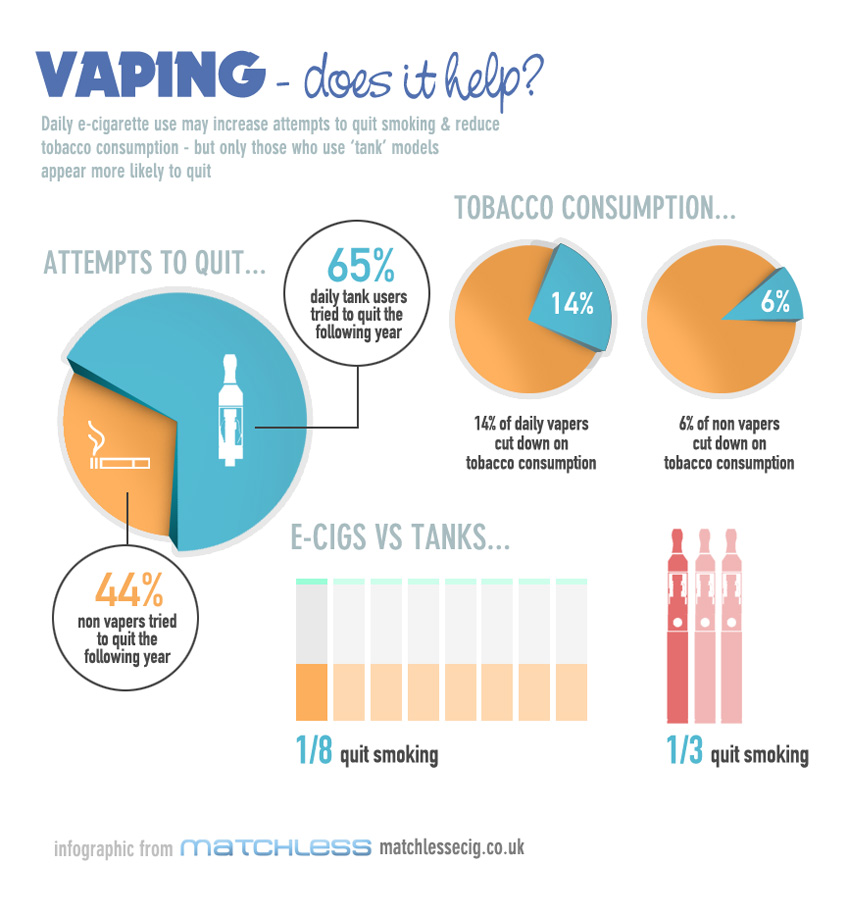 Athletes who Vape Infographic – Vaping overtaking Nicotine Patches and Gums? The Perversity of Government Should Vaping Be Banned in Public Places?