When was the last time you saw someone smoking on a British-made television show? There was a time when you’d forever see dear old Dot Cotton with a fag hanging out of her mouth. Nowadays you hardly see cigarettes at all. But you do see something else, and it’s getting more regular too – the e-cigarette.

It was only a matter of time until Dot herself – famously played by June Brown – was given an introduction to an e-cigarette. This happened back in 2011 and it was prompted by June’s decision to switch to vaping in real life. And they say life imitates art. It looks like here it was the other way around.

In November last year viewers were also introduced to the first couple of television adverts promoting e-cigarettes. They were shown after the watershed but they were quite a watershed moment in themselves.

But when you look into the topic of characters using e-cigarettes in TV shows, you don’t find too many examples on UK television at the moment. Not in relation to British characters like Dot Cotton anyway. Who knew Dot would end up being ahead of the curve?

House of Cards, an American TV series, famously featured vaping in a recent series. This was of course based on the original UK series of the same name. 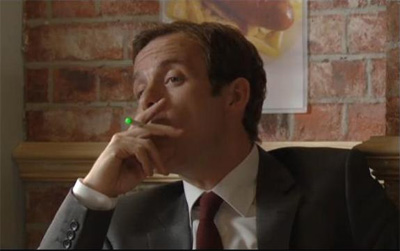 Roxy’s shady solicitor vaping in the popular cafe in Eastenders

It’s also interesting to see which characters are vaping when you see it happen. Michael Shannon, an actor who featured in 99 Homes and used an e-cigarette on-screen, said it became an essential part of his character. So perhaps we will eventually see this idea moving over into the world of television as well.

It’s actually very hard to find examples of vaping on UK TV at the moment, unless you are watching something made in America. We suspect this is bound to change, especially as more and more films and TV shows feature the e-cigarette. Of course you have to think about what vaping means for a particular character. It tells you something about that character after all, doesn’t it? And perhaps this is why examples of vaping on UK TV have yet to really come to the fore. Maybe there aren’t too many characters this would fit in for.

We shall keep our eyes open for some other examples of vaping made famous by British TV characters though. We suspect it won’t be long before more examples come to light.